Meditations and musings upon my moss

While moving the moss pads, I couldn’t help but notice that the mass to volume ratio was 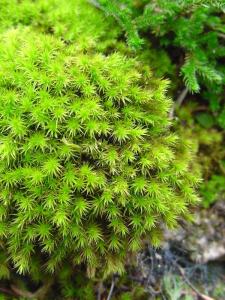 Like a lot of little wigs for my dirt.

very high (Smartypants! That means they were real heavy for their size!).  Unlike most plants, which pull moisture from the soil through their root systems, mosses ‘breathe’ in moisture from the air; yet each pelt of moss dripped with water as I carried them from the deep woods to their new home in the clearing, despite the shallowness of the root structures I had gently cut from the earth.

Right after transplanting, we had a remarkable-for-this-year couple of days without rain, and I moved one of the pads out of the way to plant a small subalpine fir.  I noted that the moss was very nearly flat, and had sunk into the light depression I had carved for it with my Hori Hori.  It rained again overnight, and while I had my coffee the next morning I marveled at the transformation:  the moss pads had literally puffed up, and their colors–various shades of chartreuse to emerald–had turned extremely vivid.  It was as though someone had shampooed the clearing with Prell.

Having lifted several of the moss pads when both wet and dry, it seems that in general the mosses hold roughly five times their own weight in water.  This moisture then evaporates, and it is likely that the plant then ‘breathes in’ this humidity from the air.  In effect, each plant becomes its own water cycle.  The trick is going to be giving the moss carpet enough moisture to keep it from going dormant (or worse).

If my mossy area were smaller, less regulated and restricted, and I were richer, I would set up a misting system mounted upon the trunks of the surrounding large trees.  This would provide humidity directly to the air, but sadly is not an option.  So in order to prevent the edges of the moss pelts from drying out I am going to side dress them with compost (for its ability to retain moisture) as well as lightly fill in the areas in between the mosses with the same material to give the mosses a good, rotting, organic medium to spread into.  I tried very hard to match the transplant area to the moss’ source:  mosses formed in deep loamy leaf rot went back in to the more humusy areas of the clearing, the muddy, boggy mosses into their analogous places, and so on, but anything to help the mosses get a leg up.  No matter what I do, eventually I will have to water my wetland.  Think about that for a second.

I am not concerned that the removal of the moss will have a negative impact on the deeper forest.  Though I have moved the equivalent of three or four hundred square feet of moss, the moss is all over everywhere and everything, so dense you cannot tell where I have taken it from: I’ve got moss like Gwyneth Paltrow has media exposure.  Neither am I concerned

that my clearing is too exposed for the moss–in the center of the clearing you can see sky overhead, but the Acer macrophyllum and vine maples surrounding my little glen provide more than ample filtration of the sunlight.  At the Bloedel Reserve, the Moss Garden is almost shockingly open and light, and the moss is thriving.  As the moss grows together it will provide a permanent solution to my runoff issues better than any number of woody plants* ever could, and as native plants go you cannot get any more native than something that already grows in enormous quantity elsewhere on the property.  Contemplative, mysterious, enchanting, blah blah, doncha know.  It just looks freakin’ cool.

*If you haven’t been reading along, this all started with a post-construction mitigation plan comprised of 289 large shrubs and small trees.  Many that did n0t drown or wash away have been moved to more appropriate sites, and those that remain are those plants that should have been planted where they are…which isn’t very many, at this point.

3 Responses to Meditations and musings upon my moss