Years ago I listened to a standup comedian do a bit on how guys will open the fridge, look in, and decide nothing looks good; a few minutes later they will go back and look again, as 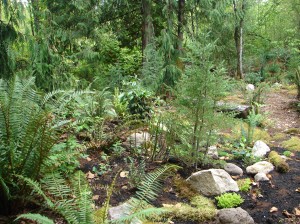 From behind a Mountain hemlock, across the back of the clearing

though something has magically changed in there.  In fact, that same bit is probably now playing six times a day on one of the 37 HBO channels you keep meaning to cancel but don’t, just in case they start playing something new.

Gardeners are somewhat like the guy in the bit.  We look at our garden, trying to figure if it looks right, see what’s new, what might change tomorrow.   A few minutes later, we go back and do it again: if you’ve ever planted more than pansies in a pot, you do it too.

A year ago, while freshly perturbed at the Mitigation Plan and the Mitigation Planner, what was actually outside my living room window was yet to be a big deal.  I had furniture to arrange and pictures to hang, and a little girl starting kindergarten in a new school without her old room or neighborhood friends.    The furniture is still now where I put it then, but so very much else has changed in a year’s time.  Even pictures I took just two weeks ago are now obsolete.

I come home from work and look out the window, or walk out on the patio and lean on the confinement fence.  It has only been a couple of days since the earth began to tilt away from the sun, but already shade has overtaken the clearing; forest mosses which were the chartreuse of dormancy have awakened from their summer siesta, and new green growth

The same tree, looking in the opposite direction. I just like the tree, ok?

is appearing on their tops and edges.  The first leaves of the Acer macrophyllum are fluttering to earth, advance scouts for the blitzkrieg of leaves and branches soon to fall from the sky.  I have changed my scrubby, forest litter-filled clearing into a cool mossy glen.  To look at it now is to see the thing that reminds you of the other thing: the way a pot roast -scented kitchen can remind you of your mom, or how a Mark Eitzel song can make you feel the way that girl broke your heart so many years ago.

Already it is midnight-dark when I leave for work, and within a week or so will be just as dark when I return home.  I’ll have to look at my garden, work in it, and drink it in on the weekends.   Dinner is almost ready and I go to the window, but my clearing is already fading into the evening gloom.  After dinner, I’m going to go look at it again.

2 Responses to Memories and old photographs