I got out of my car the other day at the same time as the driver in the spot next to me.  Wild-eyed and a bit disheveled, she fairly shrieked at me: “You’re killing the planet with your SUV, one-percenter!” Did I calmly explain my particular vehicular needs and preferences to her? Did I remark on the greasy black coating of burned oil all over

Carbon offsets–not a real thing until someone figured out how to make money from them.

the hatchback and bumper stickers of her 30ish-year-old Subaru? I didn’t say anything about the pack of cigarettes on the dashboard in combination with the infant seat in the back, nor did I shout, “I own an acre and a quarter of second-growth native Northwest woodland! CARBON OFFSETS, BIZNATCH!”  Nope.  You can’t reason with the unreasonable (OK.  What I did say was, “As long as we’re on it together when it dies, then cool.” ZING!).

As my friend Elaine noted recently, the Pacific Northwest is very green.  Our wealth of forest and relatively ‘mild’ weather keeps the region looking full and lush even in the bleak winter months; but when you are restricted to Native-only plants, as I am, it can become a chromatic homogeneity that punishes your gardener’s eye for lack of variety.

The region is also very ‘Green’ as well, and this frequently manifests as a brand of environmental class-ism that can lead to plant snobbery, public policy that retains little common sense, and a feeling of moral superiority that causes breakdowns in parking lot social civility.   The Pacific Northwest was famous a couple decades ago for its rather cold, but polite, social reserve.  Now, I’d say, it is a place where anyone’s right to have a nose ends where someone else’s swinging fist begins.

The city I live in forced me to hire a Mitigation Planner who provided a woefully miserable Mitigation Plan.  Upon its failure, I went off-script and have followed my own plan: still all-Northwest-native plants; and unlike the original, still ALIVE.  Nevertheless, I am a lawbreaker, I am wrong…but I wonder if I am more or less ‘Green’ for lack of ‘official’ conformity.  Periodically, I will talk with someone in a nursery or online, maybe at the Washington Native Plant Society sale;  I tell them what I am doing, and they tell me how “Awesome!” it is.  Really? Do you want to have a government body tell YOU what to plant, how to garden, try to force you to pay a third party for services you don’t want and they have shown they are not good at providing? Didn’t think so. 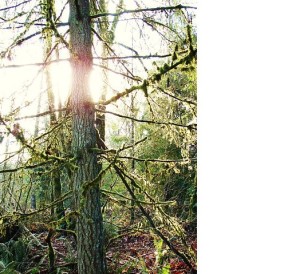 This is THE tree we cut down to build our house. It was lovely, and we have suitably memorialized it by framing it in a nimbus of sunlight. There were some alders too, but they were going to break off or fall over anyway.

The city I live in is also young, incorporated in 1999.  While our elected officials skew moderate- to lightly conservative, I am pretty sure we imported our bureaucrats, functionaries, and supernumeraries from Seattle and King County, government bodies with a rich and storied history of taking ‘the public good’ into the realm of ‘public babysitting.’  I love the green of the Northwest, but how I wish for the color of Cornus ‘Midwinter Fire,’ the spring herald of Azalea ‘Hino crimson,’  the Autumn blaze of Acer japonicum ‘Anything…’ plants, incidentally, I cannot have because they are not native–though they are hardly invasive and I cannot see what potential negative impact they or any other non-invasive ornamental plant could have upon my woods, my clearing, or my wetland margin (apart from adding a whole new layer of dietary interest for rabbits, Mountain Beavers, and deer).  And so despite the 1,500-home subdivision just on the other side of my wetland and their suburban pastiche of lawn, of English Ivy, of mow-n-blow-n-go yard services, of daily visits from TruGreen Chemlawn and Scott’s Lawn Care, it is the City’s policy of ‘Green’ that keeps me green.   ‘Greener’ than many, I’d say, and ‘greener’ than I have to be, for despite being told to fertilize and to eradicate my pernicious weeds using glyophosphate (really), I don’t do those things.  Sadly, though, for my parking lot friend, I am not going to drive a Prius anytime soon, because at six-four and 250 pounds I like my SUV just fine, and I can fit lots of native plants, organic soil amendments, and critter-cover-providing boulders into it at the same time.  Along with my ordinance-mandated litter bag.

NEXT: Part Two: green, or ‘Green?’ : The rise of the new Pharisee, ‘Green’ building, ‘Eco-scaping,’ and what they have to do with my backyard