Didn’t see that one coming

One late-August Saturday I went out to the patio with my morning coffee, as is my wont.  While admiring the splashes of sunlight on my mosses I noticed that the mountain beavers, inactive for a month and a half or so, were back.  My wife joined me and remarked on how beautiful the clearing was beginning to look.  I said, ‘There are another 28 plants missing this morning, that I can count from here.  By the time the Mitigation period is up I think I am really going to resent living here.’  When she asked me what I meant, I spoke of creating a garden that looks good from the living room or from the second floor, but which we cannot use as we’d like. To have any progress creating something beautiful continually thwarted.  Poor soil, incredible browsing pressure, property resrictions that require me to work regardless of result or even good sense–a nexus of conditions that I cannot change or control and which fuel a low-level, simmering anger that is my constant companion.

A kitchen made to be photographed

This began a conversation that lasted for several days.  At our old home, when I remodeled the kitchen, there was no discussion of ‘work triangles:’ I merely knew my wife would stand right here, and that everything must be built around her individual work habits.  In our current home, appliances and features were placed by the architect for maximum aesthetic impact.  For my wife’s work habits, this has created the opposite of ‘work triangles;’  instead there are triangles that interfere with the way my wife works and that disallows for anyone else, like me for instance, participating in meal prep.  Which is too bad, because I prep like a white guy teppanyaki master, and makes for large swaths of unused countertop that become home only to accumulata.

I have never liked the floor plan for my family.  Before we built this house, I used to sketch our dream

A seventeen-year old girl could hide out, text the day away, and be soooo deep and misunderstood here

home, once went so far as to draft a set of plans to take to a home planner.  The dream was a house with one large room to cook, dine, relax, and entertain in, with a master suite that opened right onto it.  Above there would be a half floor with our daughter’s room, a guest room, an office.  The idea was space that would encourage us to be ‘withgether,’ as my daughter used to say when she was three.  We live now on three floors that keep us far apart.  I had thought if we took this plan and filled it with the fixtures and finishes of a thousand late night conversations, that something that was not quite right could be something that we could love.   That high ceilings and a grandiose master suite could turn my heart. 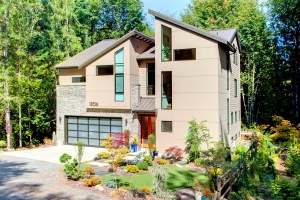 ‘Just ride your bike from the garage door to the end of the driveway. Trust me, you’ll love it.’

The property restrictions, the things we knew we might have to live without, I thought we could just go to the park or learn to live differently.  That notion changes when the entire family must mobilize to ride bikes or just play outside.  Play becomes work when it is not right outside your door, and no child should go without a swing or a tree fort if there is room for them or inclination.

When bought this project I knew there were restrictions, but didn’t know how restrictive (and how could I, as so many were created on the spot?). I was in no position to fight, as I could not get a Certificate of Domestic Occupancy (CDO) unless I complied.  Ironically, anyone who might come after me here may not ever be able to get a permit for a pole barn or a gazebo, but the CDO has been issued and there are almost three times as many native plants as in the original plan.  I cannot see how anyone else could be held as captive to these things as I have, and frankly, we are not like most of the people who live in our community.  The cyberlawn and ‘stroll garden’ just mean less yard work to pay someone else to do.  There is a cabling in every room to allow for high-speed gaming and TV watching all over the house.  This house is wildly imperfect for my family but likely VERY PERFECT for most. 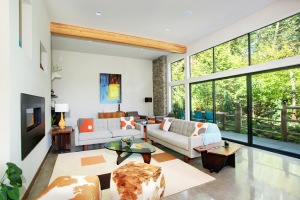 Twelve-foot ceilings and radiant heat in the polished concrete floors, end tables I made and a custom-fireplace surround I designed. We roller skated in the living room one Christmas morning, but only once because the acrylic wheels marred the floor.

I have described living in my house as like ‘living in a sculpture,’ or like having an unlimited stay at the nicest hotel I have ever been in.  Someone commented to me once that my house is the ‘best curated home’ that they had ever visited.  Le Corbusier once said that ‘a house is a machine built for living’  (he also said ‘a chair is a machine built for sitting,’ and probably said ‘a piece of celery is a machine built for eating cream cheese.’ He was a bit of a one-note song, quote-wise).  We live in a house that is ‘a machine built for looking awesome.’  Unfortunately, some shoes by the front door, the mail, a pile of homework, the general disorder of day to day life, and the machine stops working at its best function. This does not speak to warmth or togetherness or the pot-roasty

Two sinks that don’t get in each other’s way, slate floors and a limestone shower with showerheads well above our tall noggins. The radiant heat wraps around the bathtub and there are fossilized seashells in the limestone tiles.

scents of memory.  No one looks back fondly from adulthood upon the Forbidden Room.  The dayslong conversation my wife and I had, ultimately, was one wherein we realized that I had sold my watch to get her these beautiful combs, while she had sold her hair to get me this beautiful watchfob.  We built our dream house, we built a gloriously beautiful house, but we are unable to make it our home.

We want a living-in house, not a looking-at house, and I feel like I owe my daughter the two years’ of mudpie-ing, worm-digging, and tree-housing I stole.  The real estate sign went out last Friday.

24 Responses to Didn’t see that one coming