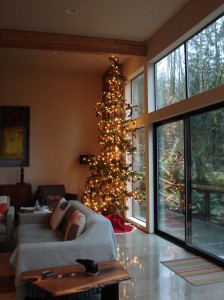 A second look at the “raw material.” The branches are all off, and now it is a Christmas pole.

The tree is down! I have never in my life had a Christmas tree stay up and decorated for so long–not when I was a kid, not when I was a bachelor, certainly not since I’ve been married. Christmas, and all its decoration, is OVER either the first weekend after New Year’s, or when it starts to look tawdry and feel crowded. Whichever comes first.

It hasn’t been laziness on our part, or “lack of time.” I am not lazy by a long stretch, and when confronted with time pressure I tend to stay up later and get up earlier than my normal 5 am to midnight ‘day.’ Really, no one wanted the tree down. Despite its rather significant size, it was kind of like having a beloved housepet. It has just been there, and belonged there.

But I promised-ish back when I put it up that I would honor the tree’s long and struggle-y life by making certain that the tree gains what George Nakashima called its ‘Second Life.’ I will make the tree into other, useful, and hopefully beautiful things so that it may live on (although the tree’s existence as Holiday Decor/Housepet was the actual second life, technically speaking). So the tree is de-limbed and is now the biggest thing in my Someday Box, and it awaits the maker’s hand. The contest will be simple: in the comment section below, give me your ideas for what could be made out of the tree. My FAVORITE idea for what could be made out of the tree wins something made out of the tree. Here are the rules:

1) Coasters, napkin rings, and candleholders are “reserved.” I have already thought of them.
2) The winning idea will be my FAVORITE. I am the only judge.
3) The winning idea must be something that COULD be made out of the tree. I am also the judge of “could.”
4) If your idea wins, your idea may not be in fact produced. Actual fabrication will be dictated by what I want to do and what I can do (in terms of both skill and schedule). I may love your idea for turning the tree into 253,417 Abies lasiocarpa toothpicks which can then be made into a 1:25 scale model of the Tour d’Eiffel, but I won’t be making it–and you won’t be getting it in the mail, either. Hence the reserve of coasters, napkin rings, and candleholders.
5) The owner of the winning idea will be notified through this site, and I will send the prize at my expense.
6) The winner will receive the prize when I get done with it. Obviously, I will need to know where to send it.
7) I cannot promise that you will LIKE your prize, only that I will try very hard to make it nice. If you receive coasters, hate them, and decide to burn them for kindling, that’s FOUR lives for the tree. Shel Silverstein couldn’t do any better than that.
8) Toothpick Eiffel Tower is now reserved also.

LIMITATIONS: Other than this has NO CASH VALUE, none that I can think of, though I guess I’ll have to be the judge of that, too. But this is open to everyone, friends, subscribers, first-time visitors, that guy by my bank who sometimes doesn’t wear pants. Facebook it, send it out to your Twitter Peeps. There is no limit to how many ideas you may offer (but if you have like 70 or so, probably best to put them all in as few comments as you can). I’ll leave the comment section open for as long as ideas are coming in regularly or until WordPress tells me to stop, whichever comes first. Ready…GO!

This entry was posted in DIY, Native Plants and tagged Abies lasiocarpa, Christmas tree contest, Contest, Favorite idea wins, George Nakashima, home, Nature, Second life of a tree, Subalpine fir, The Soul of a Tree, videogames, What could I make?. Bookmark the permalink.

17 Responses to The Second Life Contest