The Start of it All

Although we are packing our bindles and preparing to leave the Sensitive Area behind, I still get asked, ‘So…how did all this get started?’  The short answer would have to be, ‘I bought this property, built this house, and looked out the window one morning and didn’t like what I saw…and got a little angry.’  But there is more to it than that. 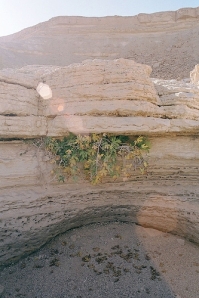 Fig trees were among the first domesticated plants. Newtons followed much later. Photo by Saul Adereth–sorry, Saul, but it was the only photo of a fig tree in a desert I could find.

the Fabulous Animal Hide drew another picture of a more impressive Primitive Man killing a more impressive animal with a pointed stick and then planted two more Trees that Grow Fruit that Doesn’t Make You Vomit outside the cave, along with some of the Flower That If You Take it Inside the Cave, it Smells A Lot Less Like Primitive Feet.  When Primitive Man

This is going to look just dar over that pile of femurs!

learned that this would only cost a handful shiny pebbles and he would not have to worry about such things any more, he was happy, as well as hopeful that other Primitive People might visit his cave and think that he had a pointy stick; and so the profession of Interior Design and Garden Design were born.  Soon Primitive Man was left with all kinds of free time to invent the Primitive Labrador to keep him company while Primitive Woman was out with her strangely unthreatening friend inventing Primitive White Wine and Primitive Gossip.

Soon, Primitive Man with the Fabulous Animal Hide realized that he could give a tiny portion of his shiny pebbles to some newcomers to the Land Of Trees that Grow the Fruit that Doesn’t Make You Vomit and they would do his work for him; and so the concept of Primitive Saturday Morning Home Improvement Television was born, wherein it was shown that if only you have enough newcomers to your land who are willing to work for cheap, you can transform the area around your cave into something fantastic in just a few short days.

A couple millenia later I was watching Home Improvement TV on a Saturday morning while trying to avoid working in the yard of my first home.  Something they were doing appealed to me and I thought:  I can do that.  Now, 20 years, hundreds of books, eighteen broken shovels, and thousands of hours of doing that, and I looked out my window and got a little angry.  Then I planted my own trees, moved my own rocks… and kept all of my shiny pebbles to myself.

3 Responses to The Start of it All